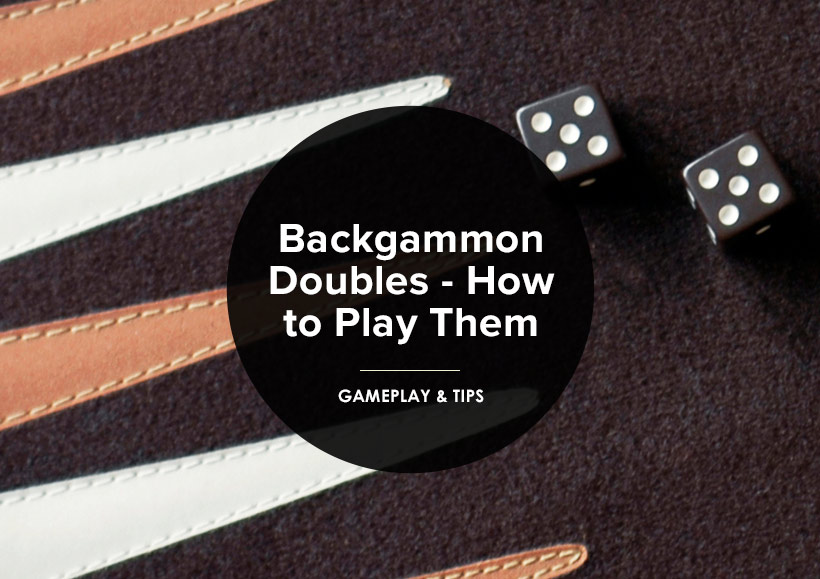 What happens when you roll doubles in backgammon

Rolling doubles in backgammon is when you roll two of the same number – so either 1-1, 2-2, 3-3, 4-4, 5-5, or 6-6. When you roll doubles in backgammon you get to move (and have to move, if you can) 4 of that number. So for example if you roll double sixes you would move “six” four times, for a total of 24 pips. If you are in a running game trying to beat your opponent to the finish line this can be a great help!

How do I play backgammon doubles

When you’re playing backgammon, the first thing you should really do on any roll is look at the board and evaluate your options. You should consider if you are in the lead or not (usually measured by a combination of pip count and board positioning), and what kind of strategy you plan to use for winning the game.

Pro tip: If you want to become a better player one of the best recommendations we can make is read some backgammon books, and practice.

One of our favorite times to get doubles is for our opening move, with double sixes always feeling extra nice! Really I wouldn’t complain if I rolled any set of doubles as my opening move.

Of course, one of our favorite times for rolling doubles in backgammon is when we want to put ourselves ahead, or extend our lead, in the running game. It’s always nice to makea big leap in pips while safely running with your pieces.

Pro tip: If you want to become a better player one of the best recommendations we can make is read some backgammon books, and practice.

Maybe you end up in a situation where some checkers were left behind (not by choice, surely) and they don’t have any anchor points near by to make a safe transition, but backgammon double dice save the day, or at least makes for a much closer game. If you can roll doubles, game winning moves it what they can be.

If you are losing the game and trying to play the back game hoping for a shot to comeback through a back game, sometimes seeing doubles is the worst feeling. Double 6s or 5s especially could be detrimental to your game, since you may be forced to move the checkers you were hoping to leave behind – often leaving you with almost no chance of winning at that point.

This has happened, and been witnessed more times than we’d like to admit, where you can only win the game with double sixes and it lands! Those ones feel nice, unless you’re on the receiving end of that defeat of course, those ones always sting. That’s why it can help to learn proper doubling cube strategy, because sometimes misfortune can be avoided by an early resignation by your opponent.

Pro tip: It’s always good practice to increase your odds and possibilities for the next roll by distributing your checkers across multiple points, meaning you don’t want to stack several pieces on a single point if you have the ability to safely distribute them instead

Backgammon doubles are great, but not always

Most of the time rolling doubles in backgammon can feel like a great stroke of luck, and it certainly can be, but what if you don’t have your checkers positioned well or play the roll poorly and leave some checkers open? It can certainly cause some frustrations, or at least a moment of panic. That’s why it’s important to have a good set of backgammon skills and understand various strategies.

A great book on backgammon: Backgammon for Winners