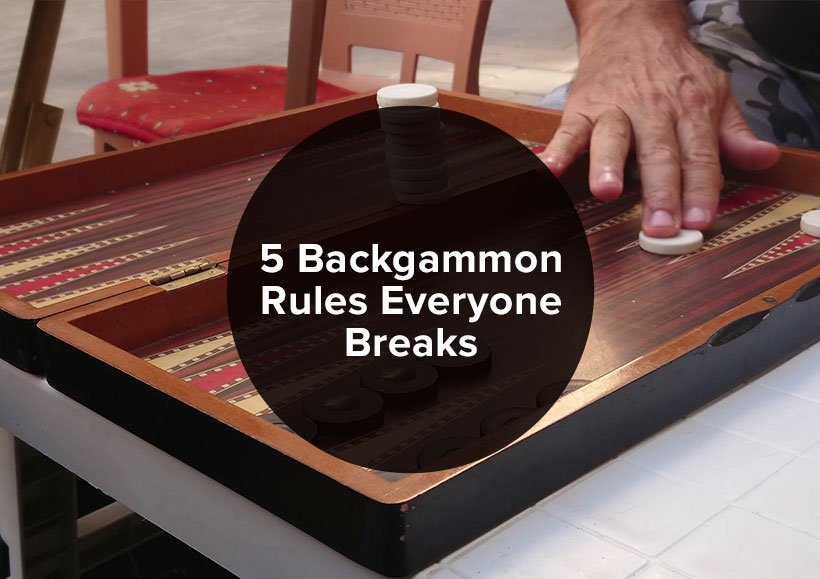 Even just knowing basic backgammon rules beginners can improve their game! In order to win, you have to move all of your backgammon pieces into your own home board and then bear them off before your opponent. What happens in between the starting and end game though, are nothing short of glorious. Backgammon battles, especially back game recovery victories, can be a great feeling of accomplishment.

One of our favorite books on backgammon: Conquering Backgammon – 2nd Edition

You’ll encounter the Crawford rule when you play in tournaments. Most people ignore the Crawford Rule. It is a standard rule for Backgammon match play. It states that once a player is within 1 point of winning a match, the next game is played without the doubling cube.  After this “Crawford Game”, use of the doubling cube resumes for the duration of the match. In general, if your opponent is leading and is one point away from winning the match, you have absolutely nothing to lose, but certainly something to gain, by offering a double, regardless of the actual position of the board.

Not the furry friends that plug up rivers, a beaver in backgammon refers to cube action done in the game when your opponent offers a double, you accept the double and immediately re-double the value of the game while keeping the doubling cube. The re-double after the accepting the double and then keeping the cube is called a beaver. It’s a great rule to use if you opponent doubles you when they are behind, or if you can predict the future.

Some people allow automatic doubles and some won’t, so you should also come to terms with this with your opponent and the rules where you are playing. Here’s how they work in backgammon. The value of the game doubles automatically during the opening roll. You can get an automatic double if both players get the same dice outcome in the opening roll. If you happen to get tied twice, then you double the value of the game twice. So you can win more than one point even before you offer a double during the game.

We’ve seen with automatic doubles in backgammon 3 doubles in a row or more, meaning the game is worth a lot more money right out of the gate, with the cube still neutral. Very scary and nerve wrecking if you ask me!

When it comes to backgammon rules doubles are easy to mess up. You have a total of four moves to make. In other words, if you roll double 5-5, you get four moves of 5 spaces using any combination of checkers. A lot of people may mistakenly only make two moves because they think it’s like a normal roll (where you get two moves), or only make three moves because of a more desirable outcome, but with backgammon if you can move a number, you must do so.

Once you have completed your turn it is the opponents turn to roll and the game continues like normal.

If you want to learn more about playing double rolls we suggest reading: Backgammon Rules Doubles and How to Play Them

This rule is more common among games in money play. This rule promotes by Oswald Jacoby and was named after him. The idea behind this rule is to avoid a long backgammon game by waiting for one player to get a gammon rather than doubling for a single point. The Jacoby rule states that gammons and backgammons will not give the extra points if a double has not been accepted by your opponent.

One of the most common rules that we seen broken is when a player rolls their dice before their opponent has picked up their dice (which is what symbolizes their turn is completed). Some players may not even know, or consider it bad etiquette if it happens, while others may completely void your roll if their dice are still on the board. A player’s turn is only complete once they pick up their dice.

7. Play your entire roll, if possible

Sometimes we see players that will try finishing their move without completing their roll. Maybe they only move one of the two numbers because they don’t want to leave one open, but in backgammon if you can use the numbers from your roll then you must. You cannot choose to only use one of the numbers because the second number may leave your checker open, that’s why its important you are always planning and strategizing.

Sometimes we see people that make the mistake of wrong checker movement (maybe they move 5 or 7, instead of 6) – but we like to think these are just innocent mistakes and try to correct them any time we seen them happen. Backgammon info is readily available for anyone who wants to get better at the game.

Now that we’ve gone over some common backgammon rules that are broken, let’s freshen up on some of the basics!

If you want to improve your game, we suggest you read: The Ultimate Backgammon Strategy Guide

Known variously as checkers, draughts, stones, men, counters, pawns, discs, pips, chips, or nips. These are the pieces that you need to move and bear them off before one’s opponent can do the same. Knowing how many checkers in a backgammon set will let you know if the set is complete and can be played – there should be 15 checkers of each color, for a total of 30 checkers.

Each player casts one die. The player with the higher number makes the first move, using the two numbers cast by his die and his opponent’s. In the event that both players roll the same number, it is a standoff and each rolls another die to determine the first move. In the event of subsequent ties, this process is repeated until the dice turn up different numbers.

In some games, players double the unit stake automatically every time they cast the same number; others limit the automatic doubles to one. In tournament play, there is no such thing as an automatic double.

Each player’s turn consists of the roll of two dice. A player then moves one or more pieces in accordance with the numbers cast. Assume he rolls 4-2. The player may move one piece six spaces, or one piece four spaces and another piece two spaces. Bear in mind that, when moving a single piece for the total shown by the two dice, you are actually making two moves with the one piece —each move according to the number shown on one of the dice.

If the same number appears on both dice, for example, 2-2 or 3-3, then the caster has rolled doubles and is to four moves instead of two. Thus, rolling doubles in backgammon like 3-3, the player can move up to four pieces, but each move must consist of three spaces, and must be used if possible.

The players throw and play alternately throughout the game, except in the case where a player cannot make a legal move and therefore forfeits their turn. Even if one player rolls 3 doubles in backgammon, it is still the opponents turn after every roll.

One of our favorite backgammon books: The Backgammon Book

Pro tip: It’s not good practice to rely on rolling doubles to win.
Relying heavily on luck will only get you so far, therefore it’s not a long term strategy. If you are serious about winning it’s important to learn different strategies, and play the odds.

A player makes a point by positioning two or more of his pieces on it. He then owns that point, or blocks hi and his opponent can neither come to rest on that point nor touch down on it when taking the combined total of his dice with one piece.

A player who has made six consecutive points has completed a prime. An opposing piece trapped behind a prime cannot move past, for it cannot be moved more than six spaces at a time – the largest number on a die.

Bear off – Winning the game

When all of a player’s checkers are inside his home board (the first 6 points), he can then start bearing off, which is essential for how do you win backgammon, or how do you lose. To bear off, you have to reach an imaginary point located just outside of the board. To bear off one piece, you need the exact dice to just remove it. This means that to bear off a piece on the 3 points, you need to roll a 3.

The farthest checker can always bear-off, even if the dice is greater than the checker position. In the position below, if white rolls a 6, it can bear off the checker from the 5 points.

The backgammon home board consists of points 1 through 6, and the outer board points 7 through 12. The 7 point is what’s referred to as the “bar point” in backgammon, and is one of our favorite points to block early rolling a 6-1 or 6-6.

Backgammon points scoring might seem confusing, but in fact it’s quite straight forward when you know the formula. When a player wins a game, the total points of that game is added to the score. How to score backgammon is simple you just add up the cube, and the win condition ie. backgammon, gammon, or regular win. So if you lose a game to a backgammon, and the cube was on 4, you would lose 3x + 4x points, or in other words the opponent would win 12 points.