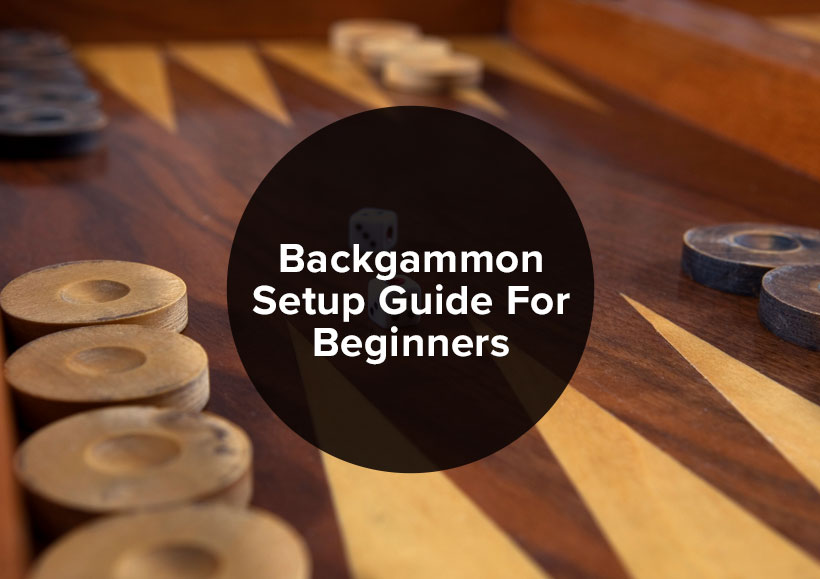 The game Backgammon is one of the oldest board games. This game is for two players and has been enjoyed by people around the world for over 5,000 years. Backgammon setup and play style is very different among other board games.

To win at backgammon, you have to move all of your backgammon checkers into your own home board and then bear them off. If you want to know how to setup backgammon, or ever wondered “how do i set up a backgammon game”, stay with us and we will tell you the basics, starting from setting up the backgammon down to winning the game.

One of our favorite books we suggest reading: Backgammon – 2004 Edition Paperback – Illustrated

There is an accepted standard how to set up backgammon board game properly. For proper board set up, lay the game board lengthwise between both players and assign each player a color, either black or white (or whatever the colors are on your board) and set up backgammon in the starting position. For your convenience we have illustrated the starting backgammon setup below:

How to remember backgammon setup might take time, but take note of this, the board is split in half vertically by the “bar,” with 12 triangles–or points–on either side. For each player, the 12 closest points are numbered 1 to 12 from right to left, and the farther points are numbered 13 to 24 from left to right.

Since you already know how to setup a backgammon board, let’s now start playing the game.  Roll the dice to determine which player goes first. The player who rolls the highest number goes first. If both players roll the same number, roll again. For the rest of the game, players alternate turns.

You may also like: Backgammon Strategy Guide – Get Better at Backgammon

Remove your checkers from the bar, if necessary, as you cannot perform any other moves until all of your checkers have been debarred. To do so, roll the dice. You have to move your barred checkers into your opponent’s home board points of the corresponding number (1 through 6), but only if they are unoccupied or open.

Bear off your checkers once all 15 are within your home board (points 1 through 6). To do so, roll the dice. You may remove your checkers from the game if they are sitting on points corresponding to the numbers on the die.

Pro tip: Just because you can, doesn’t mean you necessarily ‘should’ bear off a checker. Strategic checker movement becomes essential near the end game, and you may end up in a situation where your opponent makes a comeback which could have been avoided by better checker positioning.

How do things turn bad?

Frankly, pretty easily. Things turn bad in backgammon pretty frequently. A game you thought you had in the bag can all of a sudden be turned upside down. Maybe it’s due to bad luck or maybe your opponent is a master and carefully crafted a comeback.

In the example below, White is being very annoying with his pieces blocking Black’s1 slot. White has probably even left those 2 pieces behind intentionally, so that they can create an opportunity to come back.

Before you know it, White strikes some luck and Black is forced to leave a checker open, and Black finds himself on the bar soon thereafter. To make matters worst, he is locked out of moves until White creates an empty slot. All of a sudden, white’s chances of winning are looking great.

Win the game by removing all of your backgammon checkers from the board. Depending on what rules are in play, you have been able to double your opponent, and even win by gammon or backgammon! Before you know it, you’ll be in Monte Carlo with your white backgammon case, winning tournaments.

Pro tip: Never give up! Treat every game as a battle until the very end because things can turn bad in a hurry (for both you or your opponent). You may win a game you thought was for sure lost, because you were committed to a back game strategy that ends up paying off!

Setting up backgammon game is easy, but it will take and practice for you to become an expert player winning tournaments. Don’t worry if it doesn’t happen overnight, just keep playing, having fun, and most of all learning!

If you want to buy a backgammon board we recommend reading: The Ultimate Backgammon Board Buying Guide

You may also like: Backgammon Strategy Guide – Get Better at Backgammon